For day to day updates from Lourdes follow the link to the blog.

Posted by administrator at 13:08

Please remember in your prayers:
The Sick and Housebound, especially:  Harry Catlow, Thomas Glannan, Ellen Sugden,
Mary O’Connor, Joan Murray, Stasia Ryan
Lately Dead: Alice Neville, Jonathan Cosgrove Mallen, Bruno Gattei
Anniversaries: Cyril & Mary Clegg, Denis Hartley, Doreen Di Gironimo, Michael Coyne
***********************************************
Due to the below email sent this week there will be Exposition from 2-3pm this Sunday afternoon for Peace in Gaza and Iraq.
This week “Aid to the Church In Need”(ACN) received an urgent message from Patriarch Louis Sako in Baghdad. Overnight the largest Christian town and surrounding villages on the Niniveh Plains fell to ISIS (now Islamic State) and, as we speak, up to one hundred thousand Christians are evacuating on foot, leaving everything behind them. The Patriarch calls it ‘an exodus, a real ‘via crucis’.
He says, “The ISIS militants attacked with mortars most of the villages of the plain of Niniveh, during the night of 6th-7th August and now they are controlling the area. The Christians, about one hundred thousand, horrified and panicked, fled their villages and houses [with] nothing but... the clothes on their backs. An exodus, a real via crucis, Christians are walking on foot in Iraq’s searing summer heat towards the Kurdish cities of Erbil, Duhok and Soulaymiyia, the sick, the elderly, infants and pregnant women among them. They are facing a human catastrophe and risk a real genocide. They need water, food, shelter…”
“Regarding the churches and church properties in the villages now being occupied by the ISIS militants, we have reports of destruction and desecration. The old manuscripts and documents are being burnt.”
In desperation he concludes, “We appeal with sadness and pain to the conscience of all and all people of good will and the United Nations and the European Union, to save these innocent persons from death. We hope it is not too late!”
At this moment in history when Christianity in Iraq stands on the brink of extinction your prayers and your efforts WILL make a difference.
**********************************
Congratulations to Tony and Kath Walkden who celebrate their Golden Wedding

If you are going on holiday have a wonderful time and know that you will be prayed for back here in St Mary’s. May you return refreshed.
Posted by administrator at 13:42

Mon – Fri No Masses this week as Fr John is going away for a few days rest but will be back next weekend.

Commemorating the outbreak of the First World War

The use of the word “Commemorating” is very important as we avoid any use of the word “Celebrate” for this is, by no means, a time to celebrate but a time to remember the start of a long dark war that would have a devastating impact in the local area through what we now know as the “Accrington Pals”.

There is no doubt that at the time there was not only a fear over what was happening, but also a great excitement of how we were going to put a quick end to the enemy and then return home better for the experience and heroes. Unfortunately that is not what happened, and far from it. Whereas today news is filtered very quickly from the front line, and often the pictures are arriving on our TV screens as events happen, in those days events would only come to light sometime after and letters, not mobile phone, was the only means of communication by loved ones to home.

This weekend we will place candles in front of the Pieta, the Sacred Heart Memorial to the Palls from Sacred Heart Church, and the Memorial in Church to those who went to war from St Mary’s School. 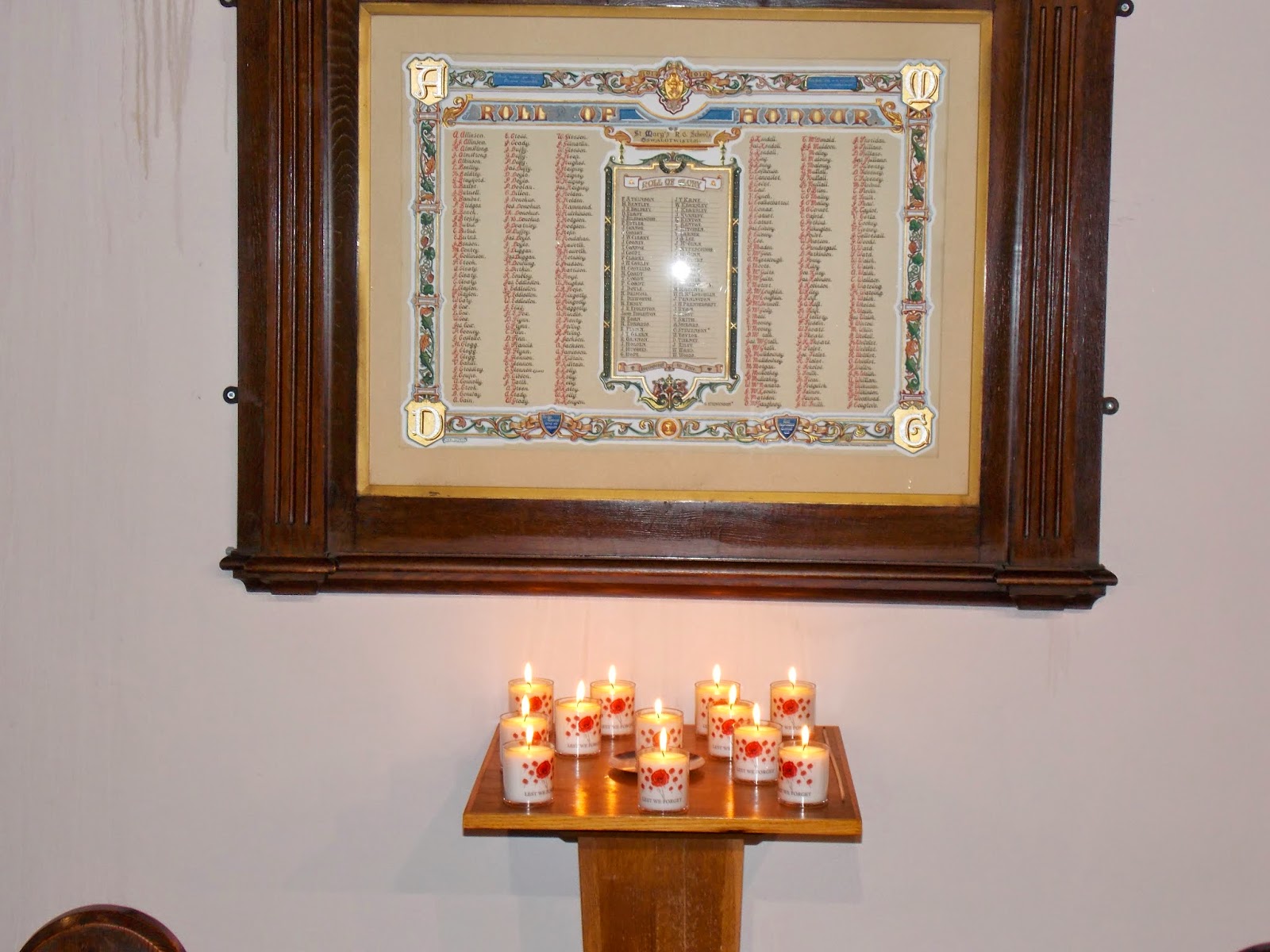 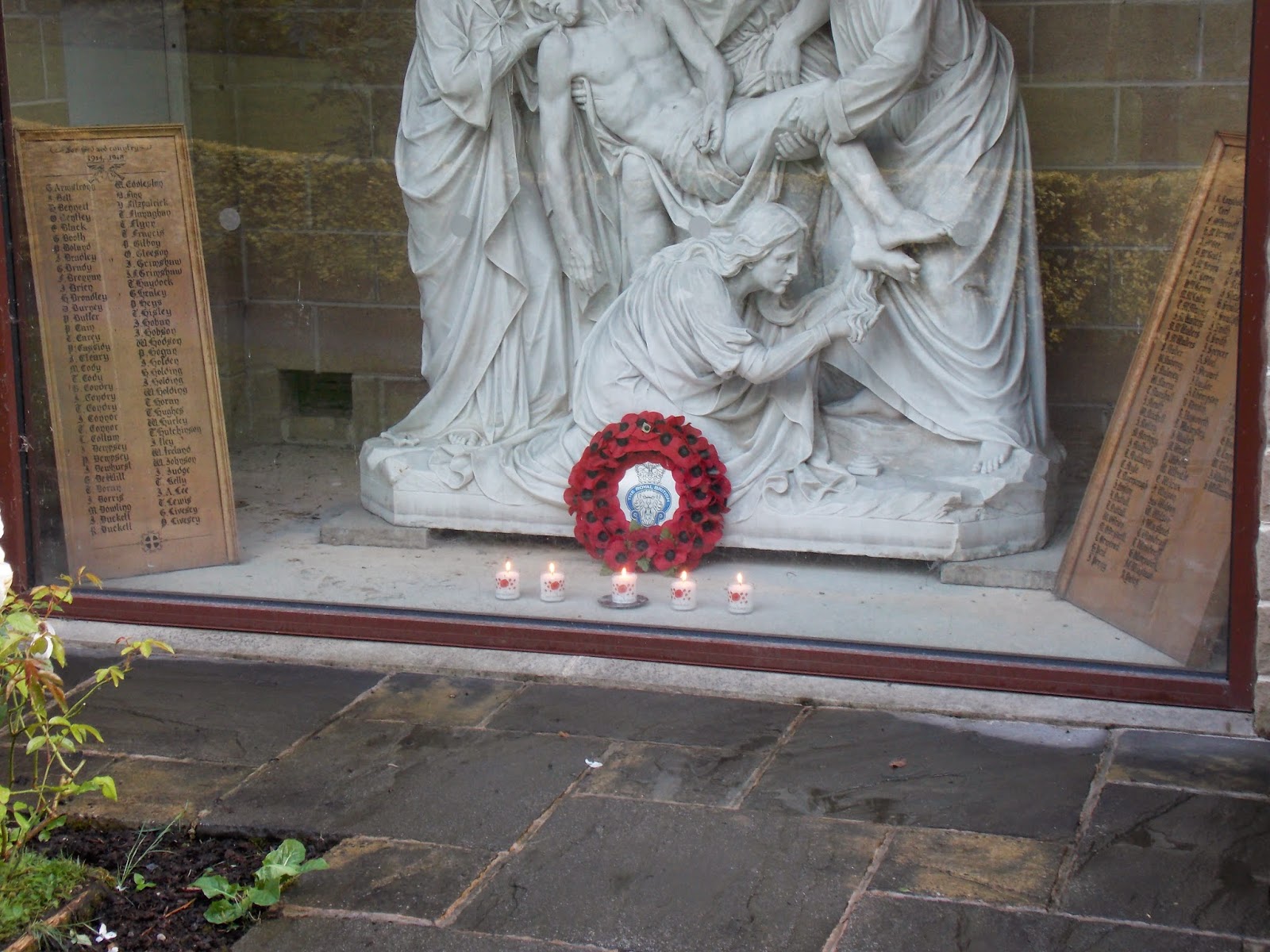 On Monday night between 10 – 11pm people are encouraged to turn off their lights and leave a candle burning in their window as an act of remembrance.

As a reminder, the former “High Altar” in St Mary’s is also a Memorial  “In memory of all the fallen Soldiers and Sailors of St Mary’s Oswaldtwistle”.

There are votive lights available from the Piety Stall, at a cost of £2 each that can be placed in front of the Pieta Memorial or the St Mary’s Memorial after Masses this weekend. Alternatively people can purchase and take the lights home to burn in their windows on Monday night between 10 – 11pm. (This is done entirely at your own risk)

If you are going on holiday have a wonderful time and know that you will be prayed for back here in St Mary’s. May you return refreshed.